Over the past five years, the number and volume of conversations around work space design has risen steadily, occasionally amplified by the publicity and fanfare surrounding the next ‘cool’ office opening. Viral photos of quirky spaces are made more sharable by the inclusion of trendy people striking curious poses; a menagerie of Millennials in fantastically themed habitats.

It seems that the notion of the grey cubicle and status offices that were once the ubiquitous norm of working environments have been shunned and replaced by laptops and lockers, barstools and breakouts; an expression that the days of control-and-demand labour are gone. Many organisations can no longer deny the global forces that have shifted the workscape; technology has mobilised and connected, space has been commoditised and five generations are rubbing shoulders at the proverbial watercooler. Silicon Valley giants, whose bold proclamation of what the modern workplace should look like: expanses of open space flanked by larger-than-life conveniences have become an expected weapon in the ‘war on talent’; their amenities and physical perks an entitlement of the new employees they seek to attract.

But what happens after the honeymoon period ends, when the Hawthorne Effect wears off and people settle into the daily expectations of working life? It is enough to stop at attraction; how might organisations keep the love affair with the mission and values alive long after an employee has experienced the initial positive change?

When a report by Gallup[1] was released in 2013, it highlighted the start of what was to become a worldwide concern over employee engagement. At that time, only 13% of employees in the USA were actively engaged in their workplaces. The UK fared slightly better with 17% engaged, but pathetically so. In spite of recent gains, the levels of engagement remain worryingly low, with the least engaged generation, surprisingly being Millennials.[2] With all this attention and money being spent on getting young people through the door dissipates into a puff of apathy. Whether due to an inflated sense of entitlement fuelled by aggressive (and expressive) competition or the inevitable habituation that occurs when things become routine, the lack of thinking around the role of the environment after change happens needs to be addressed. The physical workplace needs to be considered not only as an attractor of talent, but also an engager of people.

A recent study showed the relative increase in productivity between lean (unfurnished, clinical) environments and enriched (decorated with interesting artefacts and colour) environments to be 17%.[3] Simply put, the more attractive a space is made, the more productive the worker. What’s more interesting is the finding that empowered environments – ones where people have been involved in the process of creation or decision-making of the space – gave rise to a 32% uplift in productivity. Moreover, through my own research, I have found that the happiness levels and engagement in an organisation increase when people are afforded a choice of settings or simply offered an invitation to contribute. Furthermore, it is the activation of spaces – the deliberate activities, events and rituals - that are built into the everyday experiences of workspaces, that bring the values and culture of an organisation to life. A slide between floors quickly becomes a gimmick unless its meaning is intrinsically linked with the values of the organisation (eg: speed of communication) and it is continually activated (eg: Friday Slide-day, when no one uses the lifts). 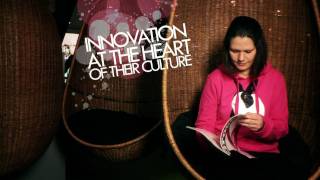